For a brief period (6 days) I was recently the not so proud owner of a Mac Mini. 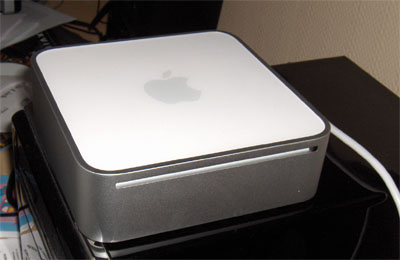 I bought it to run Debian and take over as the new house server, however Installing Debian proved to be easier said than done.. All the guides out there deal with having it work as dual boot, not to run only mac. I tried 3 times to install, but each time I messed up the partition table I had to do a 12 gig mac os X install (which by the way is the worst operating system since Windows 3.11).. Even if I did get Debian installed (which I’m pretty sure I would have done in the 4th try) :), I suspect the BIOS compability crap would require it to have a screen attached to boot :(

So just to spare myself the aggitation I sold the crap and cut my losses (especially the loss of time which should have been spent fixing the Starsystem controll view in Trekwar).

At least I learned something:

My ban on anything from Apple had been eased a bit lately seeing that they started using a Unix(freebsd) base for OS X, and using Intel processors instead of their own stupid crap. But now that I have some first hand experience, I’m pretty sure the ban on apple products will last for the foreseeable future.