I recently got Majesty 2 on steam. And to sum it up in 1 sentence: “Majesty 2 sucks!”

Majesty 2 is a RTS game which calls itself a “kingdom simulator” with RPG elements. You build structures, but never control the units directly. The units live their own lives, level up, buy gear at the blacksmith and generally just go around like little tiny virtual idiots.

The graphics are charming and gives the game a nice fantasy atmosphere, building is fun, researching techs are pleasant and the RPG features of the heroes you recruit seems really good. Also the concept of not controlling units directly but by placing out flags (putting bounties on enemy structures or creatures, or putting up exploration flags) does seem pretty interesting.

However there are three major issues that are just bad game design and ruins what could have been a pretty enjoyable game: 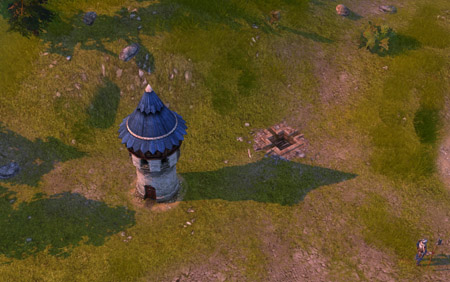 The first thing I noticed that I knew instantly was going to grid my gears for the entire game was one or two spawn points that always pop up in your town. These frequently release various rats that will kill your peasants, damage your buildings and just be a constant source of annoyance the entire mission, for ALL missions. Don’t get me wrong, sewers is a classic RPG setting, and if done correctly it could have been very entertaining, but it ends up being a steady stream of annoyance without any reward or fun. Imagine 3 zerg popping up in your base in Starcraft EVERY fucking minute, worst idea ever.

Another annoying factor is the AI. It’s piss poor… You have ranged/melee dps and a healer class, but watching them trying to do anything is like watching the worst PUG of noobs trying to down a boss in WOW.. It’s just ends up being a painful display of ineptitude. And the cloth users seems to have a particularly strong death wish, and constantly go in for some melee dps. The enemy AI is even worse than your own heroes. I saw 3 skeletons chase a wounded ranger across the map while their home was being destroyed by a warrior.

Let’s get one thing straight, you will not be able to have any clearly defined zones of combat, fronts or build a good defense for your town like you can in for example Starcraft, Warcraft, Age of Empires or basically any RTS game. The enemies will be many, they will be spread out all over the map, new enemies will spawn pretty much constantly even when their spawn points are taken out. The enemies are stupid as hell and just consists of groups of enemies that attack in waves without any form of strategy.

Not as big a problem as the 3 above, but it’s still a bit funny :) It seems they have hired a single voice actor to do the game, he will tell you your quest objectives and talk during all cut scenes, intros, etc.. Now this would not be a problem, except they got a goddamn Sean Connery sound-alike who does an excessive Scottish accent. He sounds like “Sean Connery” from the Saturday Night Live sketch, and it get’s really hard to take anything he says seriously.. I keep expecting him to say something like “The minotaurs has destroyed the village, Suck it Trebek!”