I’ve been pretty busy playing Fallout New Vegas since it released Friday, have played around 20 hours and just recently got Veronica (voiced by Felicia Day) as a companion and made my way to the Strip to talk with Mr. House (voiced by Rene Auberjonois), it’s like being in geek heaven.

I really like the game so far, tt’s basically the same as Fallout 3 (not a complaint), and I like the story and setting so far. I do miss the 50′s music, but I listen to the Fallout 3 soundtrack almost daily anyhow :)

Seems like since I got Veronica the game has started to freeze up when trying to close it. But other than that it has been very stable and bug free.

I did however notice a strange bug with Veronica once I logged in.. She kept grinning for the entire session. It started to really creep me out: 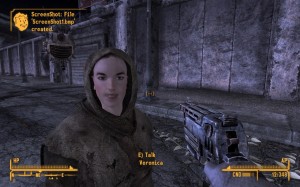 previous I is old.. yay!

next Neil Degrasse Tyson on my wall